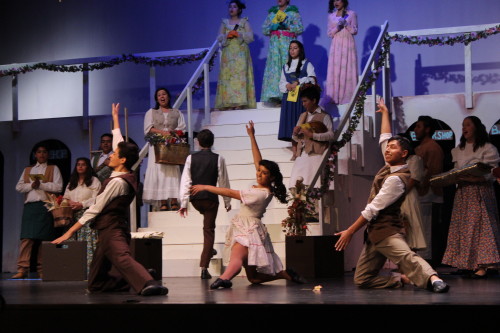 On April 9, the Thespian Honors Society performed their version of Rodgers and Hammerstein’s “Cinderella,” capturing the talent of our fellow Moors in a collaboration of the visual and performing arts.

The play maintains many beloved iconic elements of the classic tale, from the voluminous blue dress to the shiny glass slipper, as well as the overall optimistic message of good karma. However, many characters have been further developed in the Thespians’ performance and the addition of multiple archetypal characters contributed to the light-hearted, comedic atmosphere. Seniors Lulu Illingworth and Alejandro Covarrubias were especially impressive in their portrayals of Queen Constantina and King Maximillion as an overbearing mother and a slightly harassed, although loving father. The tyranny of Cinderella’s family was also offset somewhat by their ridiculous antics and the characters were as annoying and foolish as they should be.

Cinderella herself, played by the talented senior Brianna Sandoval, was very much the Cinderella we are all well-acquainted with—dreamy, inexplicably kind-hearted and full of love. Junior William Martinez also showcased his talent as the familiar, lovable prince and an excellent co-star to Sandoval.

The magical quality of the play was only enhanced by beautifully crafted sets and costumes. From village to castle, the set pieces all had tremendous detail with the backdrop fitting in perfectly with the era in which the musical took place. The costumes were also very well designed to fit the characters—the stepsisters with tacky and brightly colored dresses and Cinderella with a simple and elegant dress.

One of the musical’s unique features was the live musical accompaniment. Played by musicians from band and orchestra, live music fit well to the Thespians’ singing. Although they started off sounding somewhat flat and disjointed, they continued to improve throughout the performance. The chiming of the clock striking midnight was particularly noteworthy.

Ultimately, the hard work and dedication put in by Thespian adviser and drama teacher Jennifer Nitschke, AHS Visual and Performing Arts Director Mark Trulson, choir teacher Samuel Chen and dance teacher Sarah Fong, as well as the student artists involved, paid off. Drama, music and dance intertwined to replicate the magic of “Cinderella” and add a humorous twist to the classic tale.