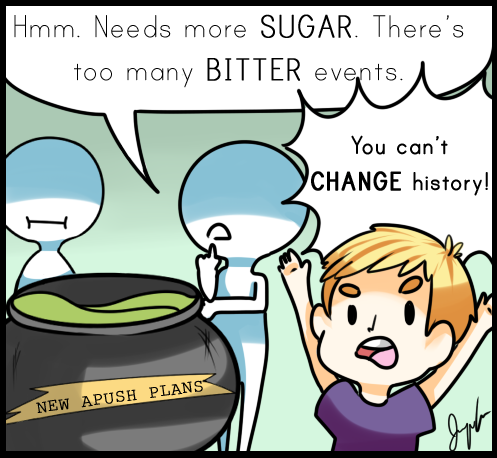 As part of a first world country, citizens of the U.S. have much to be proud of. However, the Jefferson County school board’s recent motion to change their U.S. History curriculum to be more “patriotic” has sparked widespread debate about the representation of the US in education. One concept should be kept in mind: history must be the accurate representation of the past in order to qualify as history.

In this school year, the College Board implemented its new Advanced Placement (AP) US History curriculum changes, in which specific concepts that College Board have listed need to be taught, but other major figures and events will still need to be addressed as well. One difference from the previous curriculum was the implementation of a new focus on historical thinking skills and thematic learning objectives, compared to the past general list of themes. According to the Hechinger Report, the changes coincide with Common Core standards. However, some were not too keen in taking in change.

In response to the new curriculum, the Jefferson County school board planned to create a curriculum committee that would change school material to be more “patriotic.” Material that would possibly encourage disobeying the law, such as certain rebellions and nonviolent protests, would be avoided. However, teachers and students saw this as nothing more than censorship, with good reason. Students from at least five Jefferson County high schools walked out of class on Sept. 23; previously, some of the high schools closed on Sept. 19 after a large number of teachers called in sick in protest, according to the Denver Post.

The student and teacher protests have garnered much needed attention, even from the College Board itself. The College Board has acknowledged and has stated its support for the students’ actions in Colorado.

“If a school or district censors essential concepts from an Advanced Placement course, that course can no longer bear the ‘AP’ designation,” the College Board said in their Statement in Support of Students on Sept. 26. According to the Denver Post, on Oct. 2, the school board also agreed to reorganize the school curriculum, but with more student, teacher and community input as well.

In perspective, nothing is entirely good or bad; it does not make sense to sugarcoat our past when we already know of its imperfections. By choosing to omit specific parts of our history, students will learn only fragments of the whole picture. They will have biased and uninformed perspectives about our past that would significantly differ if they were given history in its unadulterated state. If we do not learn of our shortcomings, how can we fix them?