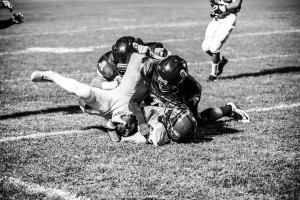 In the third week of the league season, the Alhambra Moors faced the Mark Keppel Aztecs in the annual Homecoming football game on Oct. 23. The crowd cheered loudly as the Moors rumbled onto the field.

To start off the game, the Moors received the ball. With the crowd cheering in the Moors’ favor, they were able to easily drive down the field and score. Next, Mark Keppel received the kickoff around the 5-yard line and struck back with a touchdown of their own. The Aztecs missed their field goal, which left the score tied at 6-6.

To start the second quarter, running back Joey Santana from Alhambra rushed into the endzone. The Moors completed the two-point conversion to make the score 14-6. On Mark Keppel’s next drive, the Aztecs were stopped by the Moors’ superior defense. This allowed for the Moors to score again, bringing the score up to 20-6. After some back and forth action, Alhambra had the ball in the red zone with only 17 seconds left before halftime. At this moment, wide reciever Steven Chester from Alhambra made an amazing catch between his legs while rolling on the ground, making the score 27-6.

“Personally, it’s a memorable moment in the season because, as a senior, that was our last game at Moor Field,” receiver Mark Alatorre said.

The Aztecs received the ball to start the second half, but the Moor’s defense proved to be too much for the Aztecs. With the ball back in their hands, the Moors scored another amazing touchdown, bringing the Moors to an astonishing lead of 34-6. Mark Keppel received the ball and drove to the 80-yard line as the quarter expired.

“We went out and executed the game plan that we practiced all week and played with a lot of intensity. I think this is one of the […] most complete game that we’ve played this year.  I’m really proud of the way we played as a team,” Coach Sarris said.

The Moors now head into their next two games searching for an entrance into the playoffs with a 4-4 record.

“I think Alhambra did really good. They played a great game on both side of the ball,” fan Giovanna Gonzales said.