Opportunity to ‘Rise From Here’ at Stage Show 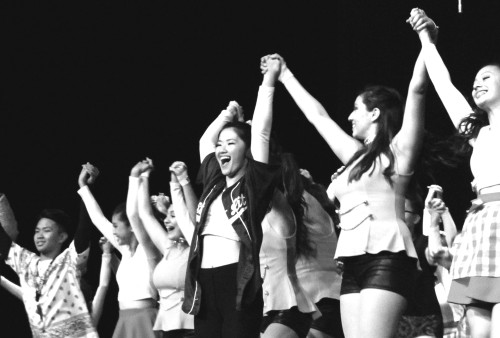 DANCING THE NIGHT AWAY
On May 1, Orchesis senior leader Sophia Lu (center) takes her last bow with other dance team leaders during AHS’ annual Stage Show on May 1.

After the end of the dance competition season, dance teams displayed the work they practiced throughout the year at the annual Stage Show. This year, Stage Show was presented on May 1 from 7:00-9:30 p.m. The performers consisted of All-Female, All-Male, Co-ed, Drill and Orchesis, along with additional solo performers who were not in dance teams and some alumni. On the day of Stage Show, highlights of the show were displayed at an assembly during school hours as a teaser for the actual show in the evening.

“Stage Show is a day [when] the dance teams [have the opportunity] to shine and show off what we have worked so hard [on] this whole year. It is a time [when] we receive recognition for all our hard work from friends [and] family,” Orchesis captain Sophia Lu said.

As a four-year member, Lu has learned to manage time, organize events and learn the responsibilities of a coach. Senior Drill captain Alexyss Hernandez also saw the leadership position as a learning experience. In the future, she plans to join a dance team at Southeastern University, which she will be attending in the fall.

“I’m truly proud of how far we’ve come as a team this year.” Hernandez said. “Being captain was like being their mom. I did my best to take care of them, protect them, teach them, motivate them, and sometimes they fought but in the end that’s what families do.”

The dance teams practiced for 16 hours each week in preparation for competitions. This year, All-Female won first place in their most crucial competition, Miss Drill USA. As they only have three minutes to perform at competitions, they enjoy having the opportunity to display more of their talents at Stage Show.

“Stage Show is a showcase of a year’s worth of growth, bond and progress. When we go to competition, we perform to win. When we perform at Stage Show, we dance our hearts out,” Torres said.

Despite having over 15 new team members, All-Male also accomplished several achievements this year. The All-Male team became defending champions at Streetdance for the third year in a row and at the Golden Cup competition for the second year in a row.