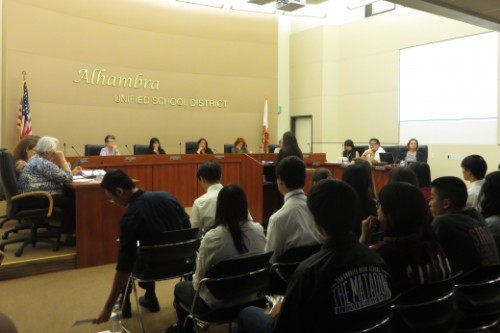 The AUSD continues to be met with protests from San Gabriel High School (SGHS) students after the controversial firing of English teacher and debate coach Andrew Nguyen and the alleged censorship of the student newspaper article regarding the issue.

In May, Rebecca Lei, editor in chief of SGHS’ award-winning student newspaper, The Matador, contacted former principal Jim Schofield for comment via email regarding the sudden dismissal of Nguyen, according to Pasadena Star News. Schofield declined to provide information, stating that policies in place prohibited him from speaking about employee matter and expressed concerns about Nguyen’s right to privacy.

Members of The Matador staff then attempted to discuss the matter with Schofield in person, but according to former copy editor Simon Yung, Schofield gave an order not to publish material about the specifics of Nguyen’s dismissal, as reported by the Student Press Law Center.

The Matador’s staff subsequently contacted the Student Press Law Center for guidance and addressed concerns of censorship at an AUSD school board meeting. On June 2, the American Civil Liberties Union asked the school district for an investigation over whether Schofield illegally censored students.

SGHS students and alumni have continued to present statements and grievances at the AUSD board meetings, most recently on Aug. 25. In their statements, they have called on the district to rehire Nguyen, discipline Schofield, end institutional intimidation and increase transparency in decision-making.

“The way in which the district dismissed Nguyen was private, the appropriate method which many individuals appreciate. No laws were broken; the only things that have been [broken] are the hearts of his students,” AHS Speech and Debate event captain Agatha Handojo said. “I think it’s great that they care so much about him to fight for him; however, I think it is time they let go. Creating this much media attention over his dismissal is only hurting him. If they really cared about him, they might consider getting to know their new debate coach and supporting their teammates in an effort to do justice to the team Nguyen worked so hard to assist.”

In the wake of the controversy, the AUSD held an administrative meeting in which they informed the district staff of students’ freedom of speech rights and student press law.