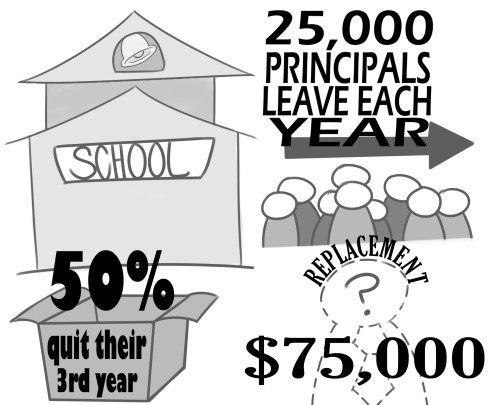 Administrator turnover rate in education is defined as the rate of which administrators in a school leave their jobs. A recent study by the National Education Policy Center (NEPC) shows that high principal turnover rate often leads to greater teacher turnover, which in turn can have a negative impact on student achievement.

High turnover rate has been attributed to conflicts with school boards about implementing reforms, lack of support from board members and an increase of retirement by baby boomers.

“The saddest part is that some administrators left even before we got to know them well. Every new administrator [has] different mindsets with different goals as they come to the school. For [everyone], the negative sides of high administrator turnover outweigh the benefits of getting new ideas introduced,” math teacher Aya Kamimura said.

“[Turnover] happens for many reasons […] I just go where I can best serve kids,” Principal Duane Russell said.
As stated by Deseret News, the transitional cost of replacing a principal is approximately $75,000 each time. At the same time, the loss of experienced leaders raises more concern than economic matters.

“I feel like AHS has been like a revolving door for the administrators and it is really hard to build continuity between teachers and superintendents. We need more stability in administration,” social science teacher Chris Cosbey said.

According to NEPC, the high-poverty low-performing schools that most need experienced superintendents make up the majority of schools that are greatly affected by administrator turnover, as the schools hire replacements on an average of every three years. According to 2013-14 statistics collected by AHS’ Guidance Office, AHS was designated as a high-poverty school, as over 70 percent of AHS students received either reduced or free lunch. Administrators who voluntarily left AHS in the past two years have mostly been getting promotions and accepting higher positions in district office instead of leaving the education field.

“I think it is a good sign that students and teachers want their administrators to remain at their sites,” Superintendent Laura Tellez-Gagliano said. “We do think through every administrative move in executive cabinet and try to make decisions based on the welfare of the district as a whole. ”